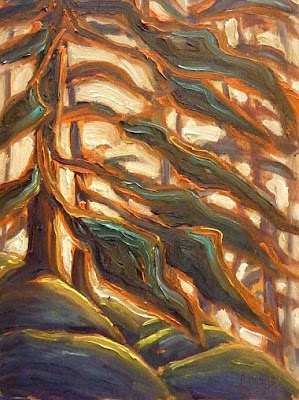 This is another version of the Race Rocks Lighthouse.
I can see the lighthouse from my studio window,
especially with the aid of binoculars (and in combination with some
Linnyland memories of summer's warm evenings).
----------------------
"Summer Evening Lighthouse"
oil on canvas
20 x 10
Posted by Linny D. Vine at Tuesday, January 11, 2011 6 comments:

Late Afternoon on the Gorge 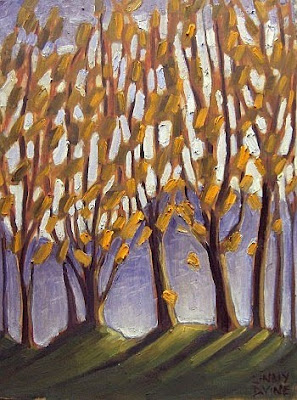 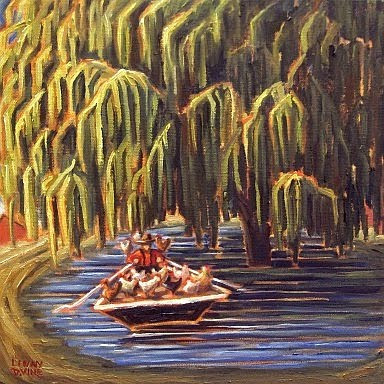 This painting was inspired

by Margaret and Rutledge Park.
I met Margaret about 60 moons ago
during a summer art event where she suggested I visit
Rutledge Park in Saanich,
she thought the park might be inspiration for a painting.
A few moons later, on a sunny afternoon, I enjoyed an
ice cream cone visit to the special little Saanich park.
As well as a pink elephant named Rutley the park has,
at it's centre, a large and beautiful weeping willow tree.
There's a path to stroll all around the willow tree
and along the outer edge of the path there is a garden bed
with six large stones evenly spaced among the flowers.
Each stone is engraved with a section of a"stone poem"
that describes little bits of the park's history including
things like when the fields of the farm flooded
and the chickens had to be saved.
And now, 57 or 58 moons (or there about) since,
the imagery from my visit to Rutledge park inspired
this little Linnyland painting.
(Margaret, thank-you, you were right!)
------------------------
"The Rescue",
oil on canvas
12 x 12
SOLD