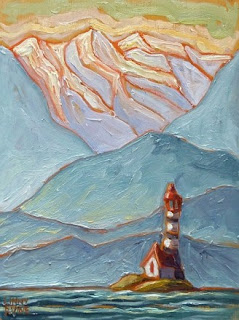 From a recent sunny morning
Linnyland painting adventure at Witty's Lagoon.
I decided to paint the snow capped Olympic Mountains
with the Race Rocks lighthouse in front.
The lighthouse was too far away for me to see any of it's features
but I thought, "No problem, I've painted it before
and I can do it from memory". (Ha ha.)
When I finished painting I could see that something wasn't
quite right with the lighthouse tower.
It wasn't until I was back in my studio, and I had looked
through the binoculars at the Race Rocks Lighthouse,
that I realized I'd given the tower an extra white stripe.
Ah...that's why the little lighthouse
sports the "convict in striped pajamas look"!
So...after some concern and careful consideration
I've come to understand that the little lighthouse
hasn't done anything too seriously
bad or wrong - really, the only crime (if one can call it a crime)
that he committed
was that he wanted to be a little bit different -
and that might explain the reason that he stands out
from the crowd the way that he does.
---------------------------------
"Little Bad Boy Lighthouse"
oil on wood panel
8 x 6
SOLD
Private Collection
Metchosin BC Canada
Posted by Linny D. Vine at Sunday, June 05, 2011